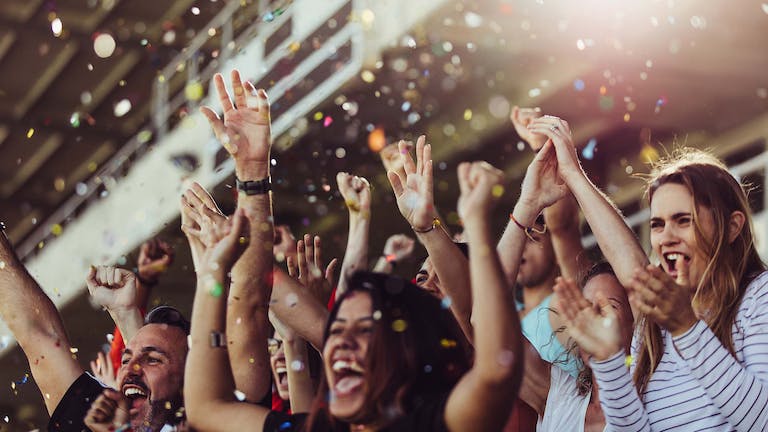 Reminders that Summer is giving way to Fall in just a few short weeks seem to be around every corner right now. School buses pack the lanes on the roads, vacation schedules begin to look barren, and everything is now pumpkin flavored. Most excitingly for myself and many Americans, however, is the return of the NFL season. There’s something about football that is uniting – a roster of 53 men from different backgrounds, of different religion, race, and ideology come together in hopes of achieving a singular goal: the lauded Lombardi trophy – awarded each year to the winning Super Bowl franchise. And according to a recent ENGINE survey, football has superseded baseball as America’s favorite pastime. Sixty percent of Adults are interested in the NFL, beating out all other major sports leagues (MLB- 52%, NBA- 45%, NHL- 37%, MLS- 27%).

And I’m not alone in my excitement – 86% of those interested in the NFL are excited for this upcoming season. So, what implications does this fandom have for advertisers in a season that still may feel different? What teams are believed to be contenders? Who truly is America’s team?

If you’re anything like my family, you make a point to watch your favorite NFL team each week (for them, it’s the Philadelphia Eagles; for me it’s the New England Patriots) so that you can stay on top of local sports talk. Family gatherings each year are filled with either excited chatter about the potential for a deep playoff run, or dread over the lackluster performance of the team. For me, it’s also filled with a lot of smack-talk about my bandwagon fandom. There are, however, 15 other games that are played by other teams in any given week to talk about. On average NFL fans watch 3 games per week during the regular season. Given that the average broadcast lasts well over 3 hours, that’s 9 hours each week over the course of a full season devoted to just viewership. Myself, I definitely fall on the higher end of that spectrum – I need to watch football just to keep up with my fantasy team!

Sixty percent of NFL fans will still be watching games through a traditional cable/satellite TV provider, but steaming platforms continue to make ground. I’d expect this trend to continue at a rapid rate well into the next few years – by 2022, in fact, fans will need to tune into Amazon Prime Video to view Thursday Night Football. For advertisers hungry to promote their product to an avid fanbase, choosing TV time during games can be quite rewarding if done right. If you’re not sure, just look-up the average price of a 30-second ad during the Super Bowl (hint, it’s $5.5/million)!

Still – there are other ways to engage with the NFL season aside from just watching, and many fans indicate that they’ll participate in some way. We found that 28% say they’ll purchase attire or memorabilia, 23% say they’ll follow key figures on social media, 14% will participate in fantasy football, and 9% will place bets via apps like DraftKings, FanDuel, etc. There’s a tremendous amount of time and money that is devoted to the NFL season by fans.

How Bout Them Boys

Unfortunately for my fellow Philadelphians, the Dallas Cowboys retain their long-publicized position as ‘America’s team’, outranking the next closest ‘favorite’ franchise by nearly double the margin. The Cowboys (10%) are trailed by the Chicago Bears and Green Bay Packers (6%), who are themselves followed closely by a trio of the New England Patriots, Pittsburgh Steelers, and San Francisco 49ers (5%).

Still, up and coming franchises have reason to believe they could expand their fanbase in the future. One key ingredient appears to be needed – winning. These six teams have combined for 39 championship appearances and 27 trophies. It’s certainly easier to cheer for a winner, if there’s any doubt about that talk to the New York Jets. They could also hope to piggy-back off fans love of superstars – for the Kansas City Chiefs that could certainly be the case with Patrick Mahomes. After just four years in the league, he’s now NFL fans second favorite player. At 44 years old, Tom Brady (former Patriot, now a Buccaneer) picks up the honor of being the favorite player among fans. Rounding out the top three is fellow quarterback Aaron Rodgers (Green Bay Packers). Developing and promoting a marquee superstar helps anchor a franchise, and hopefully, bring home a Lombardi trophy.

The Elephant in the Room

It would be an understatement to say that COVID-19 impacted the NFL season last year – many fans were barred from events, players were under strict guidelines, and empty stadiums became the norm when turning on RedZone. Similar restrictions have found their way into the upcoming season; over the past week alone two players have been fined for mask related violations. Fans, however, will be allowed to attend NFL games (and in most cases, at full capacity). There are mixed feelings among the public about how this is being handled.

Among NFL fans, 66% are concerned about the prospect of fans spreading/contracting COVID-19 as a result of attending NFL games and 63% think players of NFL teams should be required to be vaccinated to be eligible to play. In addition, 59% believe fans who want to attend NFL games this year should be required to show proof of vaccination. Still, the vast majority (73%) agree that having fans return to NFL stadiums this year is exciting and will improve the overall experience of watching football. And I agree – under the right guidelines and safety protocols, the possibility of heading to an NFL game this year is extremely exciting. There’s a certain aura of a packed Sunday game at a full stadium; the roar of the crowd, the smell of the food (for us, it’s Chickie’s & Pete’s fries and cheesesteaks), and the sound of a big hit on the field. Of all the things in the world, this experience ranks among my favorite. And 17% of consumers agree with me – as they plan to purchase tickets and attend games in person this year.

As I’m writing this, there’s officially only 24 hours left until there isn’t a week without ‘real’ football (the NCAA kicks-off, followed in suit by the NFL) into the New Year. That means social media will be abuzz with highlights and takes, group texts will be dominated by sports talk, and my family will likely have to suffer through another disappointing Eagles season. As I said earlier, there’s something uniting about football – and the country is in desperate need of that now.

Want to find out more about our CARAVAN solutions?